Welcome to Day #5 of our October Horror Hop, where for this week, we’ll check out SM Blooding’s “Whiskey Witches” series!

First up, Episode #5: Blood Moon Magick. Check it out and enter the giveaway for the chance to win a $25.00 gift card, too! 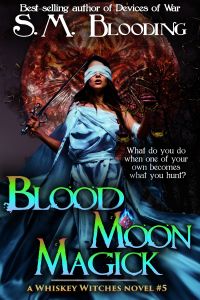 Going back to Denver should have been easy. Old life. Old routine. Ten kinds of “all good.”

However, with her gifts open, the paranormal world isn’t going to let her have that easy life. It turns out her partner of the last five years is a vampire and has been for several decades. He’s also the regional paranormal protector.

So when a few shapeshifters go missing, he gets the case.

But there’s also a demon killing those shapeshifters, a demon she can’t hunt because she’s still an open target for possession.

Not to complicate matters, Dexx isn’t about to let Paige out of his sights. Bringing a demon hunter to a shapeshifter party only makes things that much more interesting. But when he gets bitten, the entire game changes.

Checkout the AWESOME GIVEAWAY and get some FREE CASH FOR AMAZON!

Click HERE to enter and
WIN a $25 Amazon Gift Card! 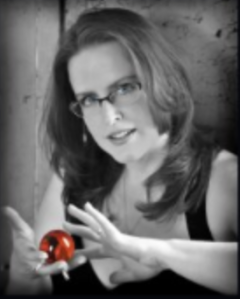 S.M. Blooding lives in Colorado with her pet rock, Rockie, and her two birds, Jack and Moose. She’s currently up to her to ears in yarn and crochet projects as she’s just discovered one in seventy-five stitches that she didn’t know. Oh, the horror.

Her real name is Stephanie Marie (aka SM), but only family and coworkers call her that, usually when they’re screaming at her. Friends call her Frankie.

Frankie challenges the world around her. She served in the military as one of the first female tactical air traffic controllers, worked at a coal mine, and shot herself through school to become a CAD (computer aided drafter) operator. She’s worked as a stenographer, a lab technician for a scientist attached with NOAA, and traveled with the Renaissance Festival. She’s survived hurricanes in a tent, and ditches in winter. She’s sometimes crass, often crude, and almost always blunt.

She loves to take the real world, find a singular line of truth, and wrap a complex fiction of reality around it. She’s incredibly excited to share her world with you, and there’s a wide selection to choose from.

This site uses Akismet to reduce spam. Learn how your comment data is processed.